The Heart of Fun in Eastern Kentucky 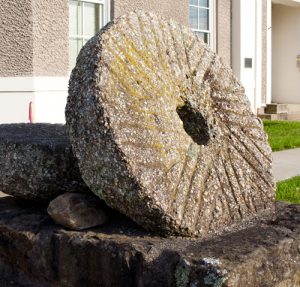 Morgan County, the “Bluegrass County of the Mountains”, is truly the jewel of eastern Kentucky. It is located in the foothills of the Cumberland Mountain Range and is characterized by beautiful rolling hills and wide valleys along the Grassy, Blackwater, Elk Fork and Caney Creeks, as well as the Licking River valley. The county is a combination of bluegrass and hill country. In the spring its hills are a mass of pink and white colors, produced by redbud and dogwood trees in full bloom. In the fall, the hills display brilliant colors of red, orange and brown from the maples, sumac, gum, oak and hickory trees.

Morgan County, Kentucky, was established on December 7, 1822 from Floyd and Bath Counties. Prior to and after the Civil War, four counties were created from it, including Wolfe, Rowan, Menifee and Elliot. General Daniel Morgan, hero of the Revolutionary War, is the namesake of the county.

When Kentucky was still a county of Virginia, and much of the area wilderness, surveyors traveled via the Licking River to ascertain the area’s settlement possibilities. Because of its fertile valleys, pioneers soon followed, drawn there by land teeming with game and virgin timber. The fertile valleys were good pasture land. Morgan County soon became called “the Bluegrass County of the Mountains.” Cattle, burley tobacco, and lumber mills would become the area’s main industries.

It is thought that the first log cabin built in West Liberty, was that built by Baptist preacher Daniel Williams. Williams, an uncle of Confederate President Jefferson Davis, had come to Kentucky from North Carolina with Daniel Boone in 1775. He was married at Boonesborough by Daniel Boone’s brother Squire Boone, and later established a church near Mt. Sterling. It was the first of many throughout the mountains. Approximately 60% of Morgan County’s population can be traced back the to Williams family. 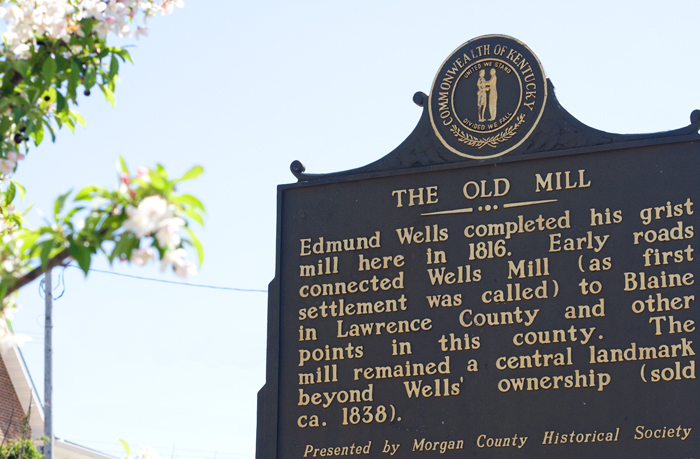 By 1816, an early settlement at the town site was called Wells Mill. It was named for Edmund Wells who operated a water mill on the Licking River. When Morgan County was founded, the settlement was incorporated to become the county seat. At that time Pike County was in the process of creating its own county seat, rumored to be called “Liberty.” To honor their eastern neighbor, Morgan County officials chose to rename Wells Mill to “West Liberty.” In 1881, Pike County decided to retain the name “Pikeville” for its county seat, in honor of the western explorer and U.S. Army officer Zebulon Montgomery Pike, thereby leaving “West Liberty” with no eastern namesake. The town is actually 100 miles east of Liberty, Kentucky.

Three Civil War skirmishes were fought near West Liberty, and much of the town was burned during the war, including the courthouse. It was replaced after the war. During the Civil War, most families claimed allegiance with the Union, although many were Southern sympathizers. Confederate leaders from Morgan County include Captain John T. Williams and Major William Mynheir. Besides one minor skirmish at McClanahan Hill, most fighting occurred at West Liberty. The earliest, in 1861, was one of the first important battles that occurred in eastern Kentucky. 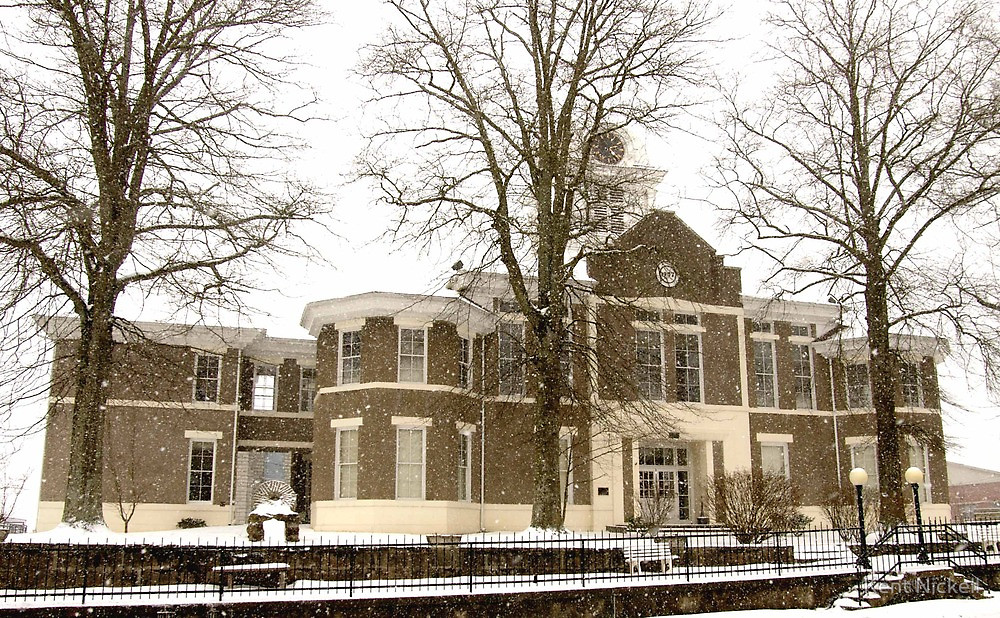 In 1907, a fourth courthouse was built. It is, today, the focal point of Main Street and housed the judicial system until 2012. The concrete block building was covered in 1936 with stucco as a W.P.A. (Works Projects Administration) project. It was completely renovated in the 1980’s and has recently been repaired due to the considerable damage it received when a tornado swept through Morgan County on March 2, 2012. It served the county for over 100 years and is on the National Register of Historical Sites. Today it houses the offices of Appalachian Regional Healthcare. Construction on a new judicial center began in 2010. By 2012, it was 60% completed but suffered an extensive amount of damage due to the March 2 tornado. Originally, both courthouses were deemed a total loss. However, upon further assessment, it was concluded that this determination was made in error and both courthouses were repaired and restored. On May 30, 2014, a ribbon cutting ceremony was held at the new judicial center. Supreme Court Chief Justice John D. Minton Jr. delivered the dedication address. 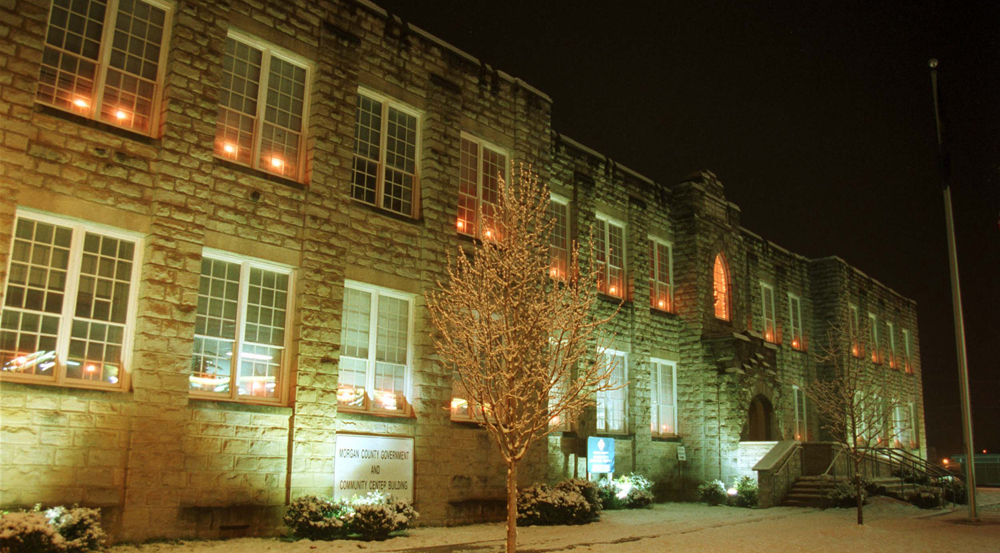 The county office building located on Prestonsburg Street is a 1935 renovated W.P.A. school building. It is a massive four story building constructed of native sandstone and is the largest W.P.A school building in the state. It was dedicated in 1937 by Mrs. Eleanor Roosevelt, wife of president Franklin D. Roosevelt. Not only does the building contain county offices, but it also houses an air conditioned gymnasium with a stage, community center, wellness center and convention center. There are four W.P.A. built school buildings standing in the county with one of them still in use as a school. In addition, the old West Liberty Firehouse was also constructed as a W.P.A. project.

Cannel City was the home of the largest cannel coal fields in the world. In 1901, the Ohio and Kentucky railway tracks were laid through the region.  Natural resources were transported from the county by the Ohio & Kentucky Railway. Additionally, the county boasted of the Morehead & North Fork and Lenox Railways. This allowed transport of coal and lumber from the north side of the county to Clearfield with potential disbursal all over the world. Cannel City became a booming coal, oil and lumber center. Business thrived until the Cannel Coal Company’s resources were depleted and forestry resources of the Licking River played out at the same time. On November 1, 1933, the last train trip was made and the track was scrapped. During the golden years, there were several grocery stores, a hardware store, post office, mine, bank, blacksmith and a hotel. Still standing, at over 100 years old, is the well used by the trains to put water into their engines. Lost over the years was a train depot at the end of Highway 134, where it currently intersects with Highway 191. At one time, the area had a larger population and count of buildings than the present-day county seat, West Liberty. After the mine closed, the area still partially thrived during the times after the Great Depression. Several remnants of the past still stand in Cannel City including the beautiful and often photographed Cannel City Union Church. An original caboose and standing bank vault can still be seen at DeLancey Park, located in the heart of Cannel City.

On March 2, 2012, a powerful weather front unleashed the state’s deadliest wave of twisters in 38 years. A tornado, later determined to be an EF-3, touched down, destroying several communities throughout the county including Woodsbend, Moon and West Liberty. This tornado left a swath of damage over a mile wide, destroying much of Main Street and several businesses and homes along Prestonsburg Street. The face of West Liberty was forever changed as  many homes, businesses and historic and iconic buildings were heavily damaged or destroyed. The aftermath revealed seven people dead with at least 75 people injured. It is estimated that 390 homes were destroyed in Morgan County.  A National Weather Service survey concluded the tornado traveled 85 miles from Menifee County to Lincoln County, West Virginia. It had the longest track of any tornado in the United States in 2012. Both local and national news agencies reported on the devastation and documented the progress in West Liberty as clean up began. Photos of the damage can be seen on several news websites, including this online photo gallery on Kentucky.com.

Today, the face of West Liberty is continuously changing as the city rebuilds. Although the heart of the city and its inhabitants will be permanently scarred by the memory of March 2, 2012, hope and resiliency continues to emerge as the city rebuilds. Momentous occasions for our community include the re-opening of our beloved Freezer Fresh Dairy, the first service held in the newly constructed West Liberty United Methodist church on April 26, 2015 and the dedication of the newly constructed West Liberty Christian Church, held on April 9th, 2016.